If you have not read the original post titled, "A Glimpse of God's Master plan through a Penny", then please click here. To understand the significance of this story, you'll want to read that story first :)

Paused with awe.
"What? Another story involving a penny?"

I am overwhelmed by the resounding testimonies that have been relayed back to me either by phone, email, text message or in person.

Sharing some of the text messages and comments from my last post, I am delighted to share with you today's 'God Kiss' (as my mom would say), comes from a dear friend of mine. I wrote it according to how I remember the story was told.

Paula text me with a message, "Do you want to go with me to the new house?" In which I replied, "Sure".

About an hour later she came by to pick me up, I got into her car and as we were putting our seat belts on she said, "I have a great story to tell you. Look what I found!" As I looked down at her opened hand, there was none other than a battered, ugly, scraped, 'been through the mill' and back penny. She placed it in my hand and began to tell me the unfolding story of God's reminders of His Masterpiece.

She proceeded with her story by saying, "Teresa, I went to Whataburger today. I experienced such wonderful customer service from a young man who had special needs."

As she told me the story of his eagerness to help, she remembered how she stood there in that moment, humbled by his willingness to serve. She was taken back by his uninhibited, ambitious ways to go above and beyond, as she had eight large orders of juicy hamburgers, with a side of fresh hot french fries along with eight large drinks. Placing her order, he made sure each individual lid was pressed inward according to the soda that was in the cup.

Paula was walking out to her car when he practically ran her over with excitement to want to open the door for her and then help get the food and drinks into her car. He flung the door wide open and smiled with pride as he was showing her, "This is what a gentleman does for a lady."

Impressed by his eagerness to help she couldn't hold back her appreciation of what he had done. As they began to place the food and drinks in the car, they visited some more as he candidly talked about how he had been hit by a car a few years ago and with an adorable cheesy grin he proclaimed, "But I'm still here."

She laughed with joy at his sweet innocence and said, "Well", and then realized she didn't know his name, but then noticed his nametag which read, "Garrett". She proceeded, "Well Garret, God obviously has a plan for you. Do you know that?" His shoulders squared back, his face lifted up as the light from the sun shone round about him and said with a big smile, "Yes I know. I go to a Southern Baptist Church and I go to get to know the pastor more." She giggled at his response and said, "Well Garrett, you truly are a blessing and I want you to know that Jesus loves you." He said, "Yes ma'am. He loves me. What church do you go to?" When she told him, his eyes opened wide, along with his smile as he happily said, "I know where that is."

In that moment as he continued to speak, in Paula's peripheral vision she noticed something shiny on the road. As she looked again, she asked herself, "Is that what I think it is? Is that a penny?" As she saw it, he was still talking and yet she could hear my mom's words, "Scoop down low to pick up."

Meanwhile as she told him that she needed to get going, he excitedly said, "Ok. Have a great day ma'am." In which she responded, "Garrett, God bless you as you have a great day."

The young man walked inside and as he did, she walked over to the shiny, round object. Sure enough! It was a penny. 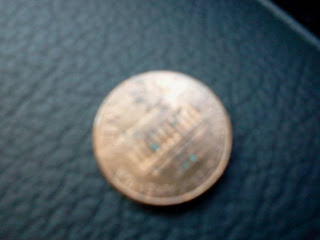 She found the penny with the back side up and when she flipped it over, this is what she found...

A penny scratched up, beat up, most likely ran over many times as I could see the silver coming forth from underneath the copper overlay. Yet in one moment, while the penny was still in my hand, after listening to Paula's story, my perspective changed on how I looked at the penny. I saw it be transformed from an ugly, scratched and battered penny to a beautiful, stunning reminder of what others see as awkward or unattractive, He calls skillful and beautiful.

While Paula was reminded to scoop down low to pick up the penny she sensed God's reminder...what seems beat up, left for dead and worthless is yet again My opportunity to transform into My masterpiece of beauty.
copper mom penny silver testimony Triumphant