God Is Mercy, Grace and Unfailing Love...and so much more! 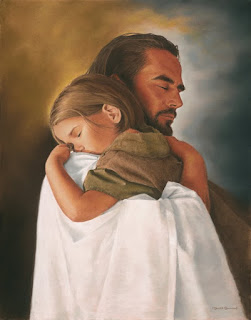 Before leaving for church, I was in a hurry, as one of my downfalls is being late.

My beautiful daughter was sitting on the chair, playing with her itouch, glassy-eyed and completely enveloped by a video she had just made of our cat, when I said, "Honey, we need to go."

Usually she is quick to listen when we need to go, yet this time, there was no response.

So I said it again with a bit more of a demonstrative tone.

Still nothing...
Now annoyed, I raised my voice volume a bit higher, revealing my frustration and said it again.

When she looked up at me, her eyebrows scrunched low, as they told on her annoyance with me as she simultaneously raised her voice with frustration and said, "WHAT?"

In that moment, it was, "O God, hold me back" as all cylinders were on and the very thing I was angry about, was the very thing I did right back raised to the one hundredth degree (It was an ugly sight on my part, to say the least).

The laws of cause and effect were so evident in that very moment, forgetting about the obedience of God in nurturing her even in that very moment. Now, I have been dealing with an attitude from her ever so often, and my attitude back is beyond ridiculous. Yet, to the degree of her overemphasized, disrespectful, "WHAT?" I had not yet experienced this from her before to this degree and to say the least, I was beyond ticked off.

As she was pale from my outburst, she hesitantly walked to the car as I followed behind her, slamming the door so hard it shook the foundations of our home. I was still fuming and yes, out of all places, on my way to church. Yet in that very moment in the midst of the angry quietness, still emitting angry, smoking fumes; breathing as though I was about to give birth, I experienced the peace of the Holy Spirit so calmly say, "Teresa, be an example of what you expect from her just as I Am an example for you."

O man....Ugh!!!!! I swallowed the big gulp of pride that was right in the middle of my throat, breathing in and breathing out slowly. I could feel the nudge of the Holy Spirit and so with embarrassment, I apologized to my daughter, and asked her to forgive me. She began to cry and expressed her apologies as she also asked me to forgive her which allowed the atmosphere to change instantly from an atmosphere of war to an atmosphere of God's peace. We of course began our dialogue as this will happen again, yet showing her how it was wrong for both of us to act the way we did, as it shows disrespect on both parts.

Learning from this scenario, especially as a parent, we walk into church and the Lord moved on our pastors heart to change the teaching from what he was originally planning to teach, to teach us simply of Who our God Is, revealed by Jesus through His Holy Spirit!

Refreshingly, as this was the very medicine for my soul that I desperately needed ~ one of the many scriptures Pastor Chris shared, waved for my attention like a flag flying in the rapid wind. It was none other than, Psalm 103:8 ~ "The Lord is merciful and gracious; He is slow to get angry and full of unfailing love."

The very whisper I heard in my car during the moment of 'battle', "Teresa...be an example of what you expect from her just as I Am an example for you" melted my heart as I heard the confirmation of Who He is and What He so lavishly displays upon us and what He is able to do through us by the power of His Holy Spirit.

I am reminded in what I have received for the taking so freely ~ His Mercy and Grace which reveals His unfailing love as they are tools to allow even our God to be slow to anger. This revelation shows me how it is imperative that I pay forward upon others what I have graciously received, revealing yet again, WHO HE IS!
Almighty God Battle. Anger Holy Spirit Whisper