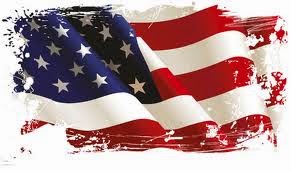 In honor of the greatest Veteran of all...Jesus Christ and to all the veterans from the past, present and future of our United States of America, this is to honor each of you!

"To those who bear the colors of RED, WHITE AND BLUE -
You WHO were and are moved by the theme of our BANNER as God is over you....
Those who witnessed their brother's and sister's who died in their youth -
It was not in vain as they went into paradise with the triumph of Calvary's salute.


To bear the brunt of freedom which is NEVER free,
It cost many something, both in soul, word and deed.
Many bear the outward and inward scars of the enemy's fight,
but your scars reveal triumph in the midst of tragedy's plight!

No fury of the enemy with weapons of tyranny and control could hold back a nation of warriors who would dare to run and shout, "O HELL NO!"
Though the bullets flew and the missiles launched -
we will not forget you mighty veterans who stood up and fought.

Today and everyday we say, "Thank you" to a remnant of warriors who shout, "Send me - I'll go"
For there are a people who echo the greatest hero of all, my Jesus who willingly gave up their own freedom so we can live and breathe with abundant life.
We honor you soldiers who have said and say, "Goodbye" to family and friend
to face a foe who has no love for life.

You will not be forgotten as we salute you with thankfulness;
refraining from complaints to overcome for the benefit of fellow man.
To every man and woman and their family's who will go without - we thank each one of you who allowed them to say, "Send me, I'll go" as they reach out.

Reaching past the now to fortify our future so that we may remain under the banner of God and the bleeding colors of THE RED, WHITE AND BLUE!"
blue enemy family flag foe free Freedom friend go red send soldier united states of America usa Veteran's Day white