"While I was partying and high on cocaine, I was browsing through my phone and would read Triumphant Victorious Reminders." - JJ (Sober for 3 years) 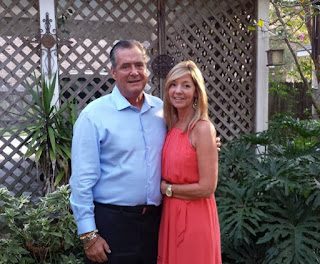 To hear the testimony of this man is like that from a movie - he is likened to a legend of sorts. As I spoke to him yesterday, he gave me permission to share what I was led to and as I look back at every moment, every twist and turn - God was wooing JJ back to Himself.

Then going further back and seeing this God who would utilize JJ's friend Jon from California, an unassuming man who was all about Jesus and for 25 years came alongside JJ. Jon being a true friend while he lived a life that was set apart with few words spoken and yet demonstrated the character and integrity of Christ.  For 25 years, no matter what JJ did - Jon was there for him - through thick and thin - the highs and lows - he would minister the love of Jesus.

Here's the incredible part about JJ's life - he was innately loyal, and some may have even considered him "loyal to a fault" - his girlfriend who soon became his wife over 20 years ago, she was promised by JJ that every week he would bring her fresh flowers - and he did.  He has hustled and gone to extremes to provide for his family, he enjoyed cooking for them, loving them and yet had these demons that pulled him into the life of the next big "deal". Yet, so many attributes within his character that were being used for the world's system - were truly gifts from the Father God that were to be utilized for the Kingdom of God so those in the world would be transformed from the kingdom of darkness into God's glorious light!


JJ had even been noticing my husband's transformation over the years - how he had noticeably been changing and was aware of the "before and after" in the way he responded to things when before my husband would have reacted like a mighty storm or even responded with selfish agendas - but he began to notice the rough edges of his life were being smoothed and polished, and this alone caused a fire to be lit within JJ's soul to want more. Then last week, the inevitable happened - JJ's long time friend Jon was somehow having to come to Louisiana from California for 6 weeks and then his stay was extended and they somehow found out about the "Broken Chains Freedom Men's Conference" in St. Amant, Louisiana - he went and his heart was pricked by the Father - and he experienced the overwhelming power and encounter of Jesus Christ -

Friday of last week I received word from JJ of how his life is no longer the same.  He realizes that this encounter with Jesus cleans him up from the inside out and his desires are changing without effort which reveals the grace of God that empowers him to rise above the old nature. Then I began to see the unfolding story of God's grace as JJ's innate character traits from loyalty to his ability to love people to staying connected with friends from years back and truly concerned for the well being of others - and then I realized who I was speaking to - all those years as JJ gathered people to party - it was his call that was being thwarted - it was God's call on his life to be a radical and to pastor people and provide hospitality which is being loosed now upon the earth.

So why do I share this?  I share this because the "Triumphant Victorious Reminder" is that God's Word does not return void. No matter what we see in the "right now" with people, when we share the love of God - God's love is relentless - God doesn't know what it is to give up - and so in His relentless love for the wayward and redeemed alike - seeds that are being planted and watered into different kinds of soil, God is behind the scenes in changing the conditions of the HEART'S soil in a seeming "suddenly" as the Word of God that was sown into the hearts of people are coming to life and increase comes to the Father in the form of redeemed sons and daughters!

To all those parents, siblings, friends, sons, daughters, co-workers, neighbors and leaders who have been believing for someone to know Jesus in a continual life giving way revealing freedom - don't give up - just keep your gaze and focus on the King of kings - don't be moved by the questions of this life that would cause us to unintentionally judge or question God or move us away from praising Him for Who He is - just stay in Him - especially in these times that reveal the enemy's mode of operation which is to kill, steal and destroy - focus on what Jesus came to give as so many are unknowingly depending on us to reveal this supernatural LIFE IN CHRIST - to give LIFE and LIFE MORE ABUNDANTLY - we get to be the revealers of this - but we must make a choice at every moment - let's continually choose Jesus - He is the Life Giver in the midst of death!