"So don't get tired of doing what is good. Don't get discouraged and give up, for we will reap a harvest of blessing at the appropriate time. Whenever we have the opportunity, we should do good to everyone, especially to our Christian brothers and sisters."~ Galatians 6:9-10 ~ 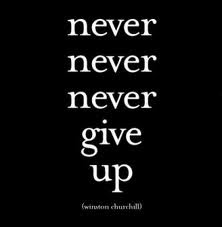 A young man, 25 years of age, enters the Military Entrance Processing Station (MEPS) in San Antonio. Every Monday for months, labeled as a 'stand by', he drives several hours with hope that there is an opening to enter basics for the Marine Corp. Every Monday, like clock work, he goes in with an attitude of, "This time they'll say, "Yes". Upon his head held up high entering the station, he hears the disappointing words, yet again, "No openings, come back next Monday."

I have to ask myself, "Upon all those no's, was he temped to say, "Maybe this isn't for me. Maybe I'm just not meant to join the Marine corp."? Yet, something inside him; everything from tenacity, destiny and purpose compelled him to keep his hope alive.

In another city, another young man, our son Cody, ready to depart Monday, March 26th for Camp Pendleton is ready to go. Although newly married to his young bride, they have readied themselves, prepared themselves for a life of sacrifice just like any other military family. Upon his goodbyes, his young wife takes him to the recruiting office where the young men await being transported to San Antonio.

All the while, the dreams our son had possessed of being a Marine since he can remember was becoming a reality. Upon his arrival, all the young men were constantly reminded of their own decisions to want to be a Marine. They allowed anyone who were to have second thoughts to let it be known now and if they didn't, once they stepped on that plane to depart for Camp Pendleton, they were no longer their own, but now they belonged to the United States military. This reminder seemed to haunt our son as his anticipated reality was being dissipated with second thoughts outweighing his initial dreams.

Hearing the reminder in his head over and over again, "Once you step on that plane you are now ours", he realized his mind wasn't ready. Although he 'fit the bill' of a Marine; from stature, intelligence, the look, but when it came down to it, he realized he wasn't ready.

Cody later said, "I didn't realize how much my priorities changed until I got there." As he made his decision, little did he know what was about to happen next. Because Cody had scored quite high on his testing, he was going in as an aviation mechanic. To be able to possess this type of job would be considered quite successful.

So, with that said, it brings me back to the 25 year old young man, who on that Monday morning, the 26th of March, drove down to San Antonio, yet again, his head held up high, knowing that maybe, just maybe, this would be the day he would hear, "Yes!" As he walked into the station, he was greeted by one of the men who worked there and was told, "Well, you will be going to Camp Pendleton today and you can thank this young man." The man in the office pointed at Cody. With restrained excitement he came over to Cody and said, "O man, thank you, I don't mean to be so happy, but I have been waiting for months for this day!"

Tears welled up in my eyes as I heard this story, realizing that everything Cody had was transferred over to this young man. This young man's persistence, perseverance and tenacity outweighed every "no", every temptation to give up and trumped every assumption and speculation that "Maybe this wasn't meant to be."

This leads me to the Triumphant Victorious Reminder, that even when others we pray for and see no hope in or it seems like there is nothing left to live for, we stay fixed on our God Who is The Way and has a way already made, even when there seems like all hope is lost. Don't give up in doing well...like this young man who went to that station, consistently every Monday, he was unknowingly growing in character and now possesses a story, an experience that no one can take from him. For his experience will trump every doubt and fear in the things to come.

I must not give up, but give in to what is good and that which leads to perseverance assisted by patience resulting in being whole in character.

I often think, "Wouldn't it be interesting if God utilized Cody as a vessel to get where he was to pass it on to who it was truly meant for?"
do not give up persevere