"For He has rescued us from the kingdom of darkness and transferred us into the Kingdom of His dear Son, Who purchased our freedom and forgave our sins."
~ Colossians 1:13-14 ~ 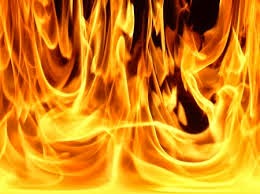 The building was consumed with fire. The billowing black smoke revealed the intensity of the fire from within.
On the top floor of the enormous sky rise building with no way out, suddenly the door burst wide open with incredible intensity.
Not being able to tell if the door had been forced open due to the flames, but no matter what, the intense heat of the fire quickly consumed the room; crackling sounds were evidence that things were melting at record speeds.

Surrounded by the reminder of your last moments as your life flashes before you - you can feel the strength like never felt or imagined as you are picked up, wisked off feeling the forceful, yet gentle wind of being carried out of the building at lightening speeds.  Simultaneously within moments of being in the room to now being rushed down the stairs, you find yourself cradled in the arms of a veteran fireman, someone with controlled strength as the intensity of being rescued becomes overwhelming.

All you know is that you have been rescued. Slow motion collides with "the now" when you feel the rescuer place your feet on solid ground.  As he puts you down, his work seems to be done. With no words spoken, he walks away.  Wait! Do you let him go?  Do you let him walk away? Aren't you curious who this was that risked his life for you? Or do you let this cataclysmic - life altering moment pass you by?

With all the intensity described, the same goes with the Rescuing Savior Jesus Christ. There are many who have let the Rescuer walk away...they talk about being saved and rescued but they don't even know who rescued them.  This hot, hunky fireman, this "man's  man" is likened to my Jesus.  He has rescued us, but many have not ran after Him, pursued Him to know more of Who is this One who rescued me?  Is the moment of being rescued more important than the One Who rescued me?  Is the event more important than the One who made the event so?

As I think upon my Rescuing Savior Jesus Christ, I think of that charge from Lisa Bevere when she wrote to me in 2004, "Teresa, Run after your Prince". A few years after her charge - this vision I shared of the "fireman" came alive in me. I realized that our churches and this country we live in is inundated with those who say they have been rescued, but have no idea who the Rescuer is.

Imagine if we did know HIM - we wouldn't live mediocre, complacent, "whatever will be, will be", passionless lives.  The results of this lukewarm living is that we know "of" the Rescuer, but we don't "know" Him.  Many of us did not pursue Him after that moment He set us on solid ground...we let Him go.  We didn't ask to 'sup' with Him, we didn't go run after Him to know more about Him.  We didn't run after Him and say, "I've got to know why you would risk it all, abandoning your rights to live - to allow me the right to not just live but live with abundance. Like bringing cookies to our local, earthly firemen - We didn't even live a more productive life to show our gratefulness.

Listen! Look! It's not too late for us!
Run after Jesus.
Pursue Him.
Get to know His familiar smell.  Really - I mean it, you've got to smell Him - intentionally know His scent so you always know that He is near!.
Get into Him, be in awe of the One Who sent Him - our Father God.

The FIREMAN of all firemen AWAITS FOR YOU TO ASK HIM TO COMMUNE WITH HIM...WILL YOU PURSUE HIM?

There's more to this life than saying, "I'm saved" -  It's about us desiring the ONE Who saved us.

May this stir up an insatiable appetite to want and desire more of Him - falling in love with the Rescuer and getting to know Him as so much more - Giver, Lover, The Generous One, The Compassionate One, The Slayer of Hate as He overcomes evil with GOOD. The One Who Draws us to Himself.  The Healer, The Strengthener, The Confident One, The One Who Makes our weaknesses dissipate as His strength is made perfect in the midst of it.  The One Who Redeems; the One who gives back more than we could have ever imagined.  He is the Lord, the landowner of all the earth.  The One Who makes the earth His footstool, the Great I Am - The Alpha The Omega - The Beginning and The End, The Author, The Finisher of our Faith.  The ONE Who Has and Is the last word over our lives, if we let HIM.  He is our Shalom - the ONE who ensures that NOTHING IS BROKEN AND NOTHING IS MISSING.  THE ONE WHO MAKES THE FRACTURES BECOME WHOLE AS THOUGH IT NEVER HAPPENED.  Are we evidence of Who we've been rescued by?  Or do we just have a good 'story' to tell?

As Lisa wrote to me, so I write to you - "Run after your Prince, Your King - His Name is Jesus!"

(Applicable ways -
Ask the Father God to allow His Holy Spirit to show you.
Read the Gospel of John
Ask God, "Father, in Jesus name, I ask, will you baptize me by the power of the Holy Spirit with YOUR UNQUENCHABLE FIRE?")

Will you let me know what happens next?

How do we defeat the enemy?  By the Blood of The Lamb (Jesus) and by the Word of our Testimony who reveals Jesus! (Revelation 12:11)