By Teresa - May 29, 2015
Triumphant Victorious Reminders
Inspired by the Holy Spirit
Written by: Teresa Criswell

So yesterday we had two of my husband's friends come over for dinner. As we were getting ready for their arrival, my husband had gone outside to grill the steaks when across the room I spotted a half of a chocolate silk cream pie on the counter. Oh goodness, my adrenaline started pumping as I honed in on that pie and as though I was in a "chocolate" trance I went to the silverware drawer and grabbed me a big ol' fork, proceeded to pop the lid off the container and without even a thought started eating that thing as though I had never had chocolate before...ha! As I came to reality, my eyes widened as I was incredibly shocked to see the only thing left remaining was a half ring of pie crust, chocolate and a little evidence of whip cream...have you ever done that? Where you ate something so delicious and realized you ate more than you had planned?  So, I guess the little girl in me thought, "Just put it on the cake stand and no one will even notice..." (I can just hear my sweet  mom's voice in her Korean accent, "Aww Teresa, you no eat like that...you know better.") 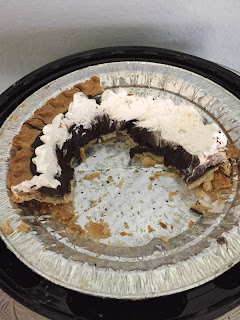 Well, upon our guests arrival, Trissy and I were getting ready to leave for a meeting - at this point I had forgotten about the pie incident. As we came back home a couple hours later, we were greeted by everyone when I spotted the same pie on the counter - but there was even more in the container than when I feasted on it just a couple hours earlier! Drawn to it yet again, I said out loud, "Wow! I love that pie!" And then I heard the laughter from the men as they reenacted what happened next, I was almost on the floor rolling in laughter!

Now you have to understand these men...they are MEN...warriors, manly and just like super heros...so they began to tell me what had happened. After they had eaten their steak dinners, my husband was so excited about this chocolate cream pie! The guys were excited too but kept visiting and about half hour later, my husband's friend reminded him, "Hey! Where's that pie?" So hubby said, "Oh yeah! Come on!" So they get up from the table and hubby opens the refrigerator when he says, "Hmmm...I can't find it...O wait! I bet Teresa put it in the cake plate", and as he walked over to the cake plate, his friend closely behind him - they spot none other than my plundered feat of the sad remains of a chocolate pie!!! Hubby quickly assesses and says, "Oh man! Well there's no putting this together" and his friend said, "What the heck happened?" And all my husband said was, "Well it looks like two little mice got in there and their names start with "T""! They busted out laughing and made a trip to the grocery store and that's how the pie "reappeared"!

So of course, I sadly admitted there was only one mouse and  it was all me in which they laughed even more.  Yet even in this real life scenario I was reminded of our amazing God - of course there are two ways to see this - but I'm going to speak from this victorious perspective...in those moments when we finally see intimacy with God is likened to feasting on a chocolate silk pie - we get to that place where we can't get enough of Him and the time spent with Him we can't believe how much time has passed - and when it looks like our day was "wasted" because of the time that got away in His presence - He redeems that time back in ways we could never imagine - and we end up getting more work done that matters to both Him and to us! The moral? Taste and see that the Lord is sooooo good as we will delight in Who He is - there's so much more of Him to be had - dig in!

Psalm 34:8, "Taste and see that the Lord is good. Oh the joys of those who take refuge in Him!"
chocolate God Holy Spirit Jesus pie Psalm 34:8 taste and see