By Teresa - May 25, 2010
Triumphant Victorious Reminders
Inspired by the Holy Spirit
Written by: Teresa Criswell

The Light reveals our God. Jesus is the Light who revealed His Father God. We have the Light that reveals the Father, but what has stopped the majority of us to shine forth the light? It's concern for the things we 'believe' or have been convinced we should be concerned with. We are concerned with who has what 'anointing', what book we should be influenced by, what this part of the church isn't doing. Before you know it, it becomes about us all over again...the vicious cycle of humanism. When we get back to the letters in Red; that Precious Book called, The Bible, we will see the unfolding and revealing of our Father God. We need to get back to the simple, yet powerful mission of Jesus Christ! His love revealed Almighty God!

I love my Jesus. He never cast out people who were demon possessed. He never cast out the lepers. Jesus did not cast out the woman with the issue of blood. He didn't let death despair Him; but He called forth life in the midst of death. He didn't cast out the people...He cast out the influences over the people, all along revealing the Love of The Father. That Love was led by God's compassion which resulted in deliverance, healing, wholeness and resurrection power! That Light casts away the darkness and reveals the powerful Loving embrace of our God! We possess the light and we have been made the Light through Jesus Christ as we have been called to repentance...am I embracing or am I shunning away? 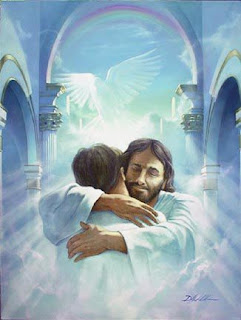 The power of the Living God is within us. God sustains us when we yield and submit to Him...there is no excuse but to reveal His Love, for it is not by our power or our might, but by His Holy Spirit (Zechariah 4:6)!
Casting out Compassion God Jesus Light