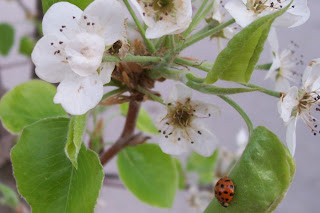 If that isn't a 'wishy-washy' statement, I don't know what is. However, I catch myself saying the same thing today. "I do believe; but help me with my unbelief."

As I read Mark 9:14-29 I was reminded of what the anecdote is to unbelief. The anecdote is prayer and fasting. I remember reading Mark 9 many times over and had always thought that it was the "kind" of demon possession that this boy dealt with that could only be cast out by prayer and fasting. However, when I read the passages again, I realized that Jesus rebuked the disciples and the people for their unbelief.

The people were puzzled as to why the disciples could not cast out the demons that possessed this boy. They told Jesus, "Even the disciples could not cast them out." Immediately Jesus said, "You faithless people! How long must I be with you until you believe? Bring the boy to me." As I read this, I catch a glimpse of the frustration of Jesus because of unbelief. I don't want to be accused of being faithless, yet I struggle with this daily.

Secondly when Jesus asked the father how long the boy had been possessed, the father revealed that it was since he was small. He explained to Jesus what his son had endured as the demons would not allow the boy to speak and the the things that his boy had to go through, being thrown into the fire or into water as the evil spirits would try to kill him.

The father was pleading with Jesus saying, "Have mercy on us and help us. Do something if you can." Then Jesus says, "What do you mean, 'If I can'"? Anything is possible if a person believes." The father instantly responds to Jesus, "I do believe, but help me not to doubt." Jesus then identifies the spirits by name and by the authority that God gave Jesus and because He believed His Father He was able to say with belief, "Spirit of deafness and muteness, I command you to come out of this child and never enter him again!"

Can you imagine the amazement by this miracle? Jesus' authority to speak and the word and the demons had to obey. The evil spirits left the boy as the boy lay there lifeless. Imagine that scene...perhaps the people were shocked by the unfolding drama as they most likely presume he is dead. Yet the scene goes from heaviness to I'm sure this unexplained joy as Jesus takes the boy by the hand and lifts him up to his feet. Yet what I find interesting is that you don't see any mention of their awe, instead it's the disciples asking, "Why couldn't we cast out the evil spirits?" Jesus replied, "This kind can be cast out only by prayer and fasting." So what is 'this kind'? It's what He's been addressing throughout the scenario...UNBELIEF.

To see this played out in my mind, do you see how Jesus was constantly addressing the issue of unbelief? Jesus was getting to the root of why the disciples could not cast out the demons. Can you imagine seeing such a scene manifest upon anyone? Being that we are driven by our five senses, perhaps the sense of sight would undoubtedly be an issue with believing that the boy could be healed.

As I am reminded by this story I see more clearly that many times I am moved by my emotions and fears of the 'what if?' If I must, then the prayer and fasting for the unbelief to leave is what needs to be done. Fasting is a challenge in and of itself. Of course, I cannot depend on my flesh, I must depend on the Holy Spirit to be able to be obedient.

All in all, the simplicity of prayer and fasting is to primarily receive MORE AND MORE OF God NOT to get more FROM God. This is why I LOVE Mark 9 and Isaiah 58...doubt and unbelief are starved as this comes out of those who live a lifestyle of prayer and fasting...it's abstaining from a life of self absorption by helping others in need.

Final ponderings...when I delight myself in the Lord and believe in Him - His desires and wants become the desires and wants of my heart; there's a supernatural exchange which causes me to see those wants and desires of HIM be fulfilled.
doubt Fasting Prayer unbelief